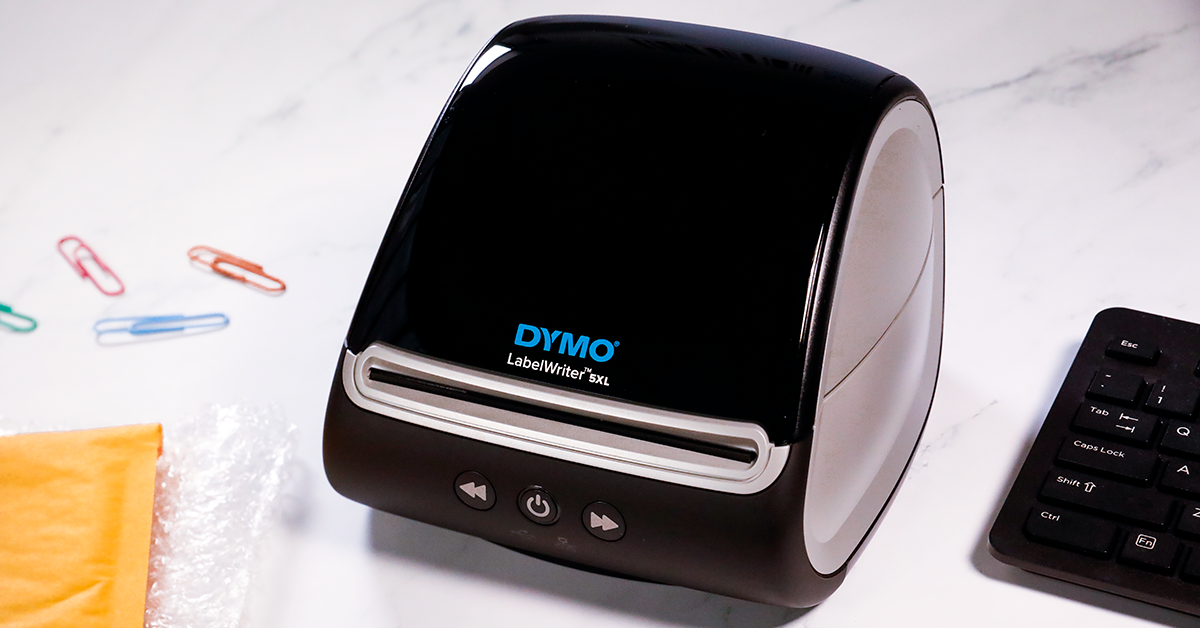 I’ve been around the block with DYMO once before.

And it wasn’t great.

When I reviewed the DYMO LabelWriter 4XL back in 2020, I was intrigued that they were the only thermal printer with proprietary labels.

Specifically, that their printers require a notch in the label liner to work.

I thought, “Well, DYMO can’t make it any worse, can they?”

And yes, it is worse.

Why is this new printer model the bane of the thermal printer market?

There’s no secrets here (unlike what DYMO’s been up to) – let’s break it down.

DYMO has always stood out as being different from other printers I’ve reviewed.

That’s mainly due to the particular labels needed for it to operate. When it came to the LabelWriter 5XL I was interested in seeing how DYMO was attempting to set itself apart from its competitors.

So what was my first impression? A few factors stood out:

At first glance, I was surprised to see how similar it was to the DYMO 4XL.

And I mean very similar.

So much that I thought there was a mistake and I was sent the wrong thermal printer. This left me genuinely confused as to what exactly was so special about this new version.

As I investigated further, I began to notice little differences: additional interface buttons, different internal setup, added connectivity. These were definite upgrades from before.

Second, the print speed. Now I understand there are reasons for this (which we’ll discuss later) but when comparing it to other small desktop printers I’ve reviewed, like Rollo and Zebra, the difference is noticeable.

It comes in dead last for speed. Not the first choice I would make if I need a large batch of labels printed in a hurry.

Third, it’s loud. I realize printers will make some noise as they print. That’s an obvious given.

But when labels print from the DYMO 5XL, they make a very distinct, uncomfortable sound, like a high-pitch, robotic whine of some sort.

It’s not pleasant. So if you’re printing several labels at once or a large batch, be prepared to cover your ears.

And finally, the RFID chip. This hidden detail seems like a harmless addition but in reality it’s the cause of massive strife with this new series.

Earlier, I mentioned that DYMO separates itself from other competitors because their printers only work with DYMO-compatible labels.

However, DYMO’s newest feature when it comes to these proprietary labels is becoming its quickest downfall.

The biggest highlight of the new 5XL thermal printer is its “unique Automatic Label Recognition.”

There are 4 mentions of it on the printer packaging alone!

The printer recognizes and displays the label size, type, and number of labels remaining on the roll. This way, labels don’t run out mid-print.

Now you may be thinking, “Wow, what awesome new technology! How convenient!”

But there’s a huge catch.

DYMO’s Automatic Label Recognition is possible through RFID technology. There is an RFID chip on the label roll core that communicates with the software to obtain information about the labels.

Meaning any printer from the 5 series, including the LabelWriter 5XL, will ONLY work with these new labels.

If you are a previous DYMO owner and have DYMO-specific labels, they will not work in any of the new DYMO label printers. 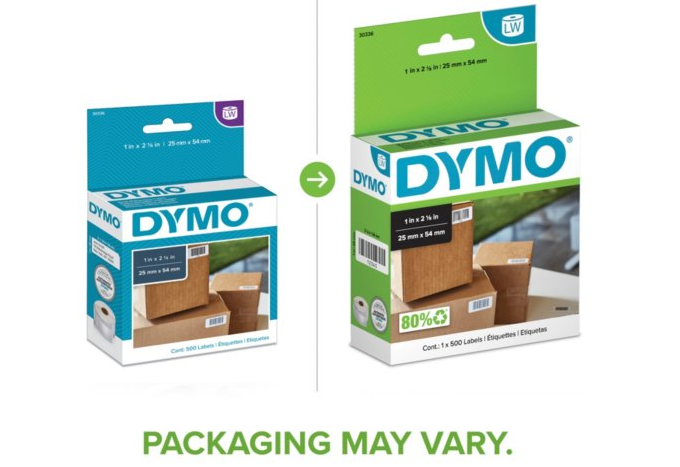 First it was the specific notch gap in the label liner.

This move by DYMO officially locks their customers into only buying labels through them. While previously you could buy other 3rd party labels that were DYMO specific, now you are officially out of luck.

DYMO tries passing these labels off as better, calling them “high-quality, BPA-free paper labels made from FSC certified material.”

That’s great and all, but they’re simply distracting from the fact that you’re trapped into buying only through DYMO.

And, ultimately, what they’re really doing is hurting the customer.

DYMO labels are not cheap. Costs will only increase over time as you print, especially with the current supply chain issues, and you’ll end up spending more than you would with a generic substitute. Therefore customers can no longer look for savings with labels elsewhere.

Older DYMO labels are now obsolete. If you own other DYMO printer models, the labels you have cannot be used in the DYMO 5XL. The RFID chip is necessary to print.

BONUS: It’s important to note that nothing on the DYMO website says anything about labels being RFID encoded. The only indication of a change is the shift to new packaging, as you can see from the above picture. Older label stock was sold in a blue box, and it’s now green.

There’s a reason that “packaging may vary.”

As if it wasn’t bad enough for DYMO to charge their customers more for a new feature.

Now they’re trying to bury the evidence of just how unhappy customers really are with the 5XL through sneaky tactics.

For example, customers who look at the DYMO 5XL on Amazon will see what looks like thousands of reviews and a high rating. This would make anyone think, “Hey, this must be a great label printer!”

But it’s all fake.

DYMO reused an old listing that already had thousands of good reviews and replaced it with the new 5XL product.

In fact, many of the new reviews for the 5XL express pure distaste and dissatisfaction. Some claimed they will never buy from DYMO again!

And I don’t blame them.

Any product that is sold under false pretenses and dishonest reviews deserves to be dragged through the mud.

If you’re considering buying this printer, stop and read the reviews first.

And then look elsewhere.

Well, if you’ve made it this far, it seems like you’re really interested in purchasing this printer.

So let’s talk about the other new features and specs of the 5XL.

You know, the ones that aren’t as devious as others mentioned above.

These are slight changes but nonetheless make the 5XL easier to use and operate.

There are now 3 buttons to use on the front of the printer:

Yes, you read that right. They just now added a power button for this printer.

The 4XL required users to connect the power adapter to the back of the printer, which is a pretty unconventional way to turn it on and off.

Now users of the 5XL can keep the power adapter connected and press the center power button. Forward and reverse buttons help feed labels back or through when loading in new sizes. 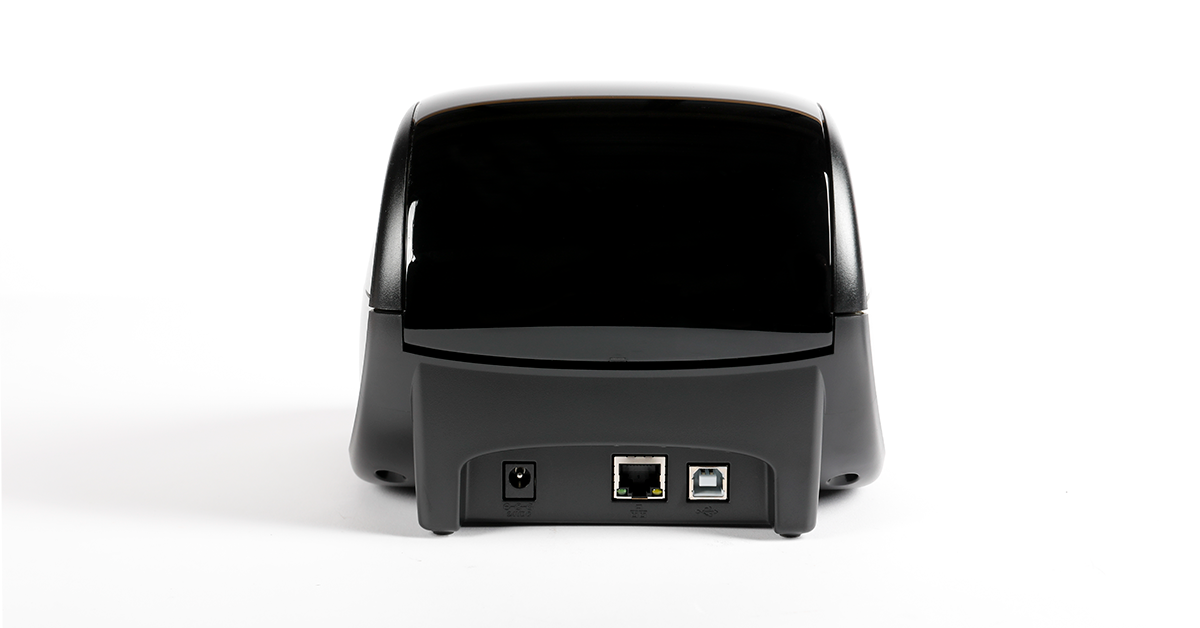 The DYMO 5XL has an added Ethernet port on the back for additional connectivity. Users wishing to connect to their wireless network to print from multiple computers can now do so.

There’s only one problem:

Users must already have an Ethernet cable themselves.

That’s right – DYMO offers this option but DOES NOT supply customers with the cable.

When I opened the box, I noticed I was only given a USB cable, a power cable, and power supply. If using Ethernet is your preferred option for printing, you must spend more money and buy a cable separately.

So this begs the question for DYMO: why not just go straight to making this printer a wireless model? Or at least upgrade it to have bluetooth capability?

Either of those options would be easier for users looking to print extra large labels!

DYMO has also moved the position of the label roll holder. Previously, it was stationed on the underside of the printer cover, which was an annoying feature.

If you had to open the cover, you risked moving labels that were already aligned properly. The new design now has the label holder positioned on the bottom, eliminating this problem.

However, there is one slight issue with the new setup.

This design means the label holder is much closer to the print head. I had a difficult time trying to feed a roll of 4×6 labels into the print head and had to bend them back to fit them through. 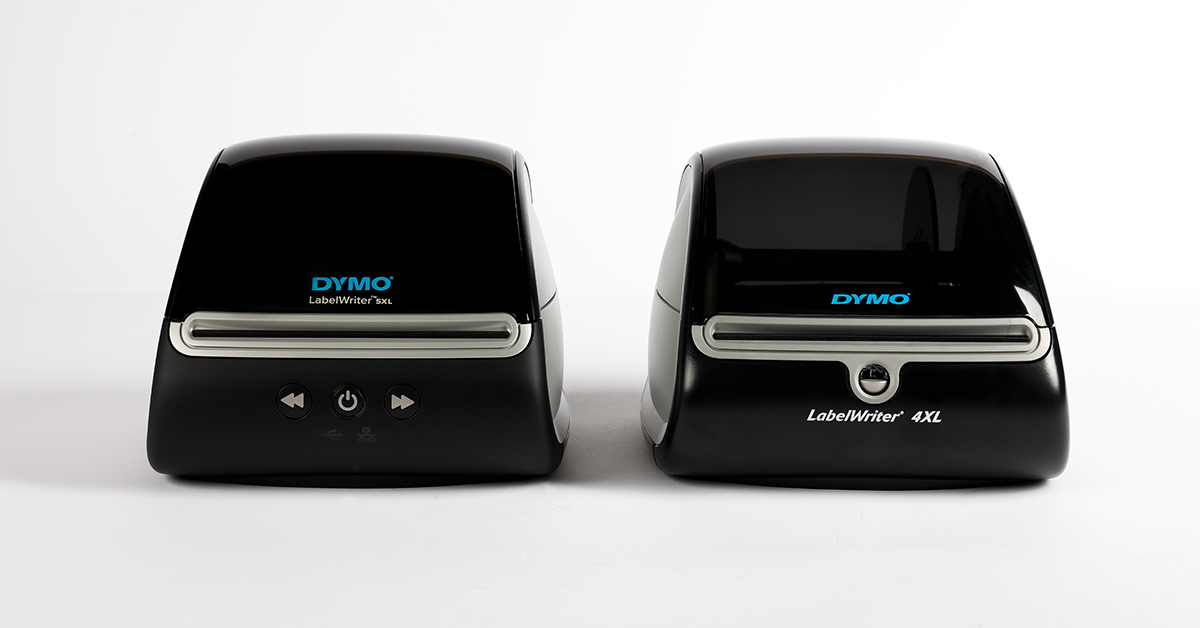 We’ve already established that the 5XL looks pretty similar to the previous 4 XL version. With few differences, it shares many other similarities with the previous model.

Which isn’t necessarily a bad thing.

If you own the 4XL, you’re already familiar with the ins and outs of this thermal printer. If not, don’t worry. The specs with the 5XL keeps it simple with set up and functionality.

Here are some of the specifics:

So is the DYMO LabelWriter 5XL worth your time and money?

A few extra buttons and Ethernet connections don’t distract from the fact that DYMO is screwing over customers in the worst possible way: by forcing them to buy their brand of expensive labels.

That’s really all this “new series launch” is about. Plus, the amount of money you’ll end up spending on their specialty labels in the long run is absolutely not worth it.

If you need a thermal printer, go with any other brand that doesn’t lock you in like this.

If you’ve read this review and decided to say “no” to DYMO, good for you! But now you may be wondering which thermal printer you should invest in.

Don’t worry, I’ve got a few options that won’t force you to buy premium brand labels.