The North American label industry has taken hit after hit when it comes to availability of materials for release liner.

While 87% of release liner is paper-based, recent events like the Pixelle mill closure have succeeded in removing large amounts of materials from the market.

As alternative options are being utilized, there’s one option we’re not seeing much of: glassine. 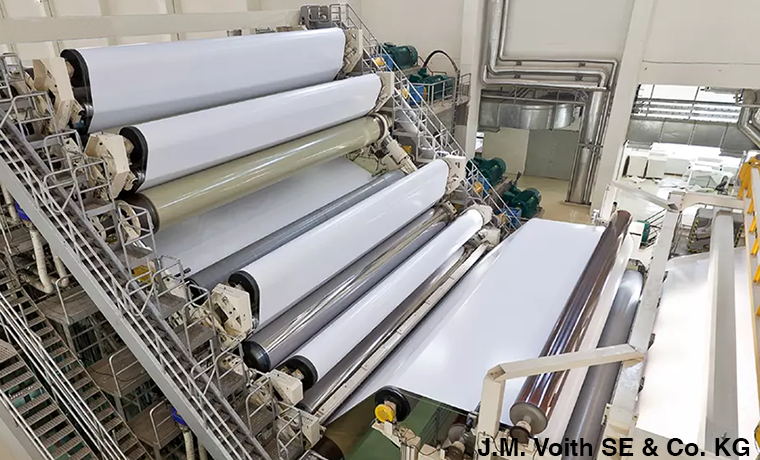 The global market for glassine paper is expected to double in the next decade to $4.7 billion USD. And almost every other paper market in the world utilizes glassine: Europe, Asia, South America.

Every market except North America.

So why is it that we’re the only one’s not open to using glassine as a primary material for release liner?

We’re breaking down glassine production and why North America is hesitant to adopt it:

When discussing glassine, it’s important to note the specialized equipment and different materials used in release liners across the spectrum.

This is because each has its own function for applications and manufacturing processes, which accounts for how much is used in the label industry.

First, the machinery. To make release liner, paper must be put through machines that have methods to both coat and calender it.

Calendering refers to the process of paper passing through alternating stacks of rolls that apply pressure, heat, and friction to smooth and polish the material. When the material is supercalendered, it’s run through an additional set of calenders to produce an even smoother and glossier surface.

While there’s a range of different release liner materials, we’re going to focus on 3 main types that utilize paper specifically:

Because glassine requires all of these extra steps, it takes more time, energy, and money to make. All of which hint at why it hasn’t made its way into our market on a larger scale.

Let’s take a look at why glassine hasn’t been an investment North American manufacturers are willing to make.

This is the biggest question. Especially when many of the other label industries use glassine as a primary material for release liner.

Due to lower pricing for release liner in the U.S., mills are less profitable and have not invested in the process to the level found elsewhere, like European mills. The European market alone has multiple suppliers of glassine, including companies like:

Point blank, North America just doesn’t have paper mills dedicated to manufacturing glassine in large enough quantities. For example, Ahlstro-Munksjö is one of (if not the only) manufacturer of glassine based in North America.

While they produce around 70,000 tons annually, this number includes both glassine and SCK materials. It’s often hard to get an exact read on how much glassine is used as it’s often lumped together with SCK since both are used in roll-to-roll applications.

The image below is an example:

However, even if Ahlstro-Munksjӧ solely produced glassine, that amount barely scratches the surface in terms of how much liner is needed for annual use.

The general assumption of release liner usage in the U.S. market falls between 500,000-550,000 tons per year. According to Datamyne, glassine use in the last few years only makes up a small percentage of this amount:

Compare these meager numbers to UPM’s production of nearly 950,000 tons per year for its users.

But despite glassine being promoted as a premium product for release liners, it still hasn’t gained popularity in North America.

So if glassine is truly a “better” material to use, why won’t we use it? There’s a few key reasons why North America won’t invest.

SCK Gets the Job Done

There’s a reason SCK is so prevalent in the North American market over glassine. Simply put, this paper material does what we need it to do with little fanfare.

North America is partial to SCK because it meets the requirements needed for labels to work without the added cost associated with glassine: smooth surface, easy release, durability in most application processes.

Our thought process is, “Why pay more for glassine when SCK works just as well?” And it’s a valid point.

Glassine has performance attributes that make it a premium product:

However, customers in the U.S aren’t chomping at the bit for all of these bells and whistles. We’re happy to use SCK with no extra performance features, which is why it’s still such a prevalent material.

In fact, if North American users have to switch away from SCK to another material, we’re more likely to use PET liner before glassine.

PET liner is film material that functions the same as glassine, especially in high-speed dispensing environments, like conveyor belts in a warehouse or during the SLAM process at an Amazon Fulfillment Center.

Also, glassine is the most expensive out of all the paper materials for release liner. Given that prices are constantly changing, it’s a rule of thumb that glassine is usually 20% more per ton than SCK.

A Superior Product to Spend Money On?

As mentioned previously, glassine is generally marketed as a “superior product.” It has a stronger surface, the liner is smoother, the release is more consistent; all of these are true.

However, it’s also more expensive all around: for customers to buy, and paper mills and converters to set up to make.

This is because to produce glassine requires special equipment. The complaint “I have to change my tools!” ends up being the biggest objection for converters in North America.

The process to convert machinery is a huge project, taking months to complete and costing millions of dollars. In 2018 UPM spent 124 million euro to rebuild and convert a paper machine to glassine production at one of their German mills. The machine wasn’t up and running until Q1 2020.

Machines used to die-cut labels on glassine liners must also be altered. North America’s standard for liner thickness is 2.4mL, which coincides with SCK. Glassine liner is thinner, between 1.5-2.1mL, depending.

Why does this matter?

The thickness of the release liner controls how deep the die-cutting machine cuts during the label making process. A thinner liner means new die plates and anvils (key parts of the machine) would be required if a manufacturer wants to switch materials.

It’s worth noting that die-cutting equipment in North America is already set to 2.4mL. Manufacturers have neither the time nor money to downgage to a thinner release liner.

But recent events might be turning the tides for future glassine use.

The Narrative is Changing

The last several years alone have caused many monumental changes in the labeling industry.

Look at the rise in PET release liners. PET liner was once promoted as a premium product only to be used for specific applications such as auto-apply.

However, its use in more variable information printing and lesser applications has skyrocketed as a result of recent paper supply shortages. With the threat of having no products to use or sell to customers, PET liner became the option of choice for label suppliers.

We’re likely to see the same story happen with glassine. For example, the main objection of changing over equipment has been gradually losing steam.

Typically, label manufacturers producing a large variety of different label shapes and sizes would find it more difficult to make the change to glassine. It would require them to replace all of their dies, and without having a high demand for glassine, switching over would be a waste.

But technology has advanced in this department over the years. Flexible die plates and adjustable anvils are available and easier to install at a much cheaper cost.

So with all of this knowledge and the direction of the label market changing, where can we expect to see glassine in the next few years?

What’s Next For Glassine?

With the current volatility of the paper and label industries, there’s likely to be a change in the way the North American market views and uses glassine.

We’re definitely going to see more of it.

Since the primary focus in North America is manufacturing SCK, glassine imports from overseas will rise. As UPM is the biggest supplier of glassine in Europe, we’re likely to get the bulk of it from them.

Our annual glassine import sits roughly around 30,000-50,000 tons. While these numbers have stayed the same over the last few years, they’re scheduled to increase as the ramifications from supply chain issues continue affecting raw material availability.

However, importing comes at a cost. Those suppliers low on products are willing to pay whatever the cost to get what they need.

It won’t be cheap but it will be necessary.